In partnership with the Washington Blues Society, the Downtown Issaquah Association is excited to announce the talented musicians for the virtual Gas Station Blues! 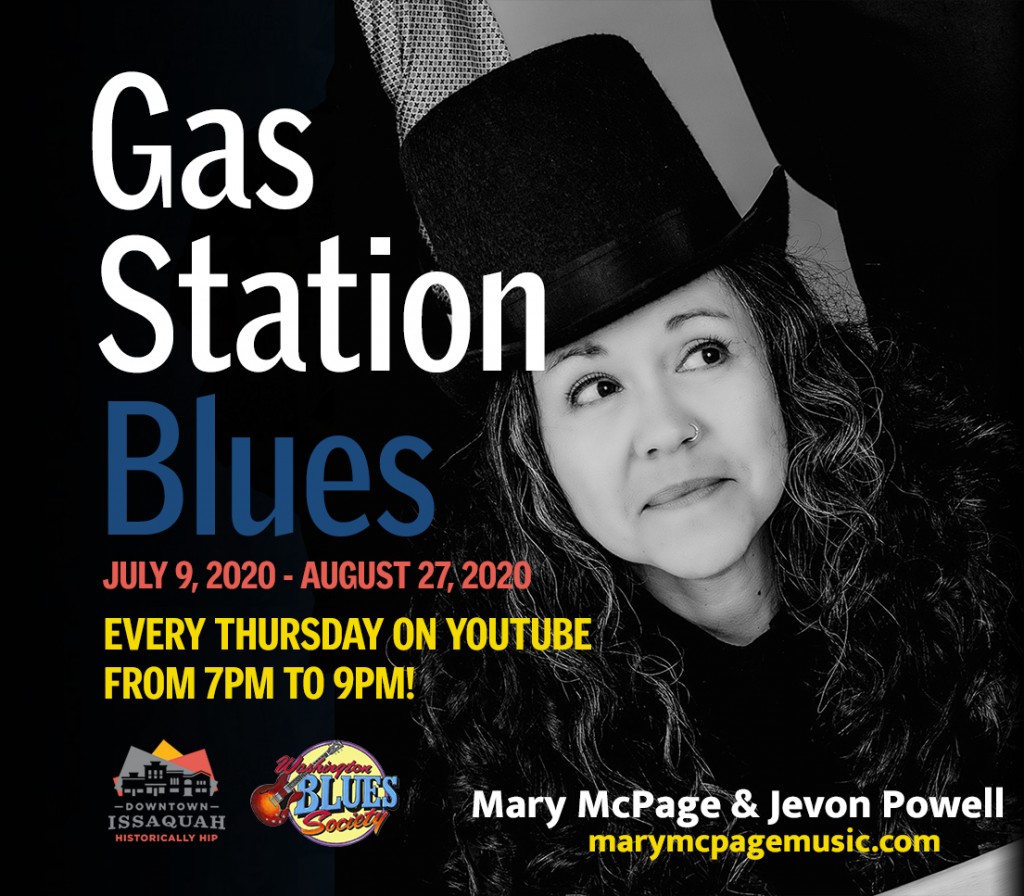 The 6th season of Gas Station Blues is an 8 -week virtual series featuring notable and talented blues artists every Thursday night from 7:00 – 9:00 p.m. July 9 - August 27, 2020.  This year’s lineup is nothing short of spectacular including Grammy award winning artists, international blues competition finalists, hall of famers and new and upcoming artists.  Gas Station Blues is really a big deal for Issaquah and has quickly become the ‘go to’ place on Thursday nights. The 2020 series is virtual so pick up your favorite take out and enjoy a picnic at a local park or your own backyard.  Keep the tradition going, sit in your favorite funky and/or decorated chair and post photos on Facebook - you could win you a prize.

This is a free, all-ages event open virtually to the public. Join friends from around the globe.
Please tune in every Thursday, July 9, 2020 – August 27, 2020 7pm – 9pm via Youtube at downtownissaquah.com/youtube or on our Facebook page at facebook.com/downtownissaquah.

7/23 - Gas Station Blues w Mary McPage and Jevon Powell
Mary McPage & Jevon Powell have been making music together since 2003. McPage & Powell is just plain good! Purely acoustic music. No place to hide… No electric guitars, no drums. Great songs, rich harmonies, entertaining and captivating! Their original compositions fuse Roots & Blues with Pop sensibilities. Their Cover songs have been deconstructed, reassembled & remade entirely their own. McPage & Powell are not your typical duo… They are the core of a sometimes six piece full on, always acoustic, band. Incorporating harmonica, acoustic bass, backing vocals & percussion. Mary is a Washington Blues Society BB Award winner, taking home Performer of the Year in 2009. This group is available for your event, party or club.


7/30 - CD Woolbury
From a reputation as an ace sideman and “The Northwest’s best kept secret” in the Pacific NW blues scene; CD Woodbury is emerging as an internationally recognized singer, songwriter, and guitarist. The CD Woodbury Band album “Monday Night!” charted internationally in its genre, including 30 weeks at #1 for the Roots Radio Report’s Washington State independent radio chart and peaking at #8 on the international independent blues radio charts.


8/6 - Billy Stoops
Born and raised in Louisville, KY, Americana singer, songwriter, and guitarist Billy Stoops has called the Pacific Northwest home for over two decades. The energetic and charismatic front man was named “Entertainer of the Year” and “Best Male Vocalist” by the Washington Blues Society, while his distinctive guitar style on both electric and acoustic along with his groove-oriented songwriting garnered him a Tacoma Music Award for "Male Performer of the Ye". Billy’s new release “Dirt Angel”, the long awaited follow up to his acclaimed 2007 recording “Little Devil” features Stoops’ rich, soulful vocals and poignant lyrics on 10 all-original pure-D Americana tunes. His new band, aptly entitled Billy Stoopars & the Dirt Angels, supports the album and tour with an all-star lineup of root’s rockin’ musicians.


8/13 - Polly O'Keary
Polly O’Keary is today’s blues woman, rooted in tradition, but informed by the 21st Century. Pulling in influences from zydeco, country, funk, jazz, rockabilly, surf and rock and roll, she and her trio, Polly O’Keary and the Rhythm Method, bring a searing and joyful performance of today’s blues to audiences across the U.S. and Canada. Polly O’Keary and the Rhythm Method is the trio she built with her husband and drummer Tommy Cook, also a highly sought touring drummer and winner of the 2017 Washington Blues Society Blues Drummer award, with whom she shared rhythm section duties for international touring act Too Slim and the Taildraggers for four years.

8/20 - Keith Scott
Live from Chicago!  Remarkably versatile, Chicago-based blues/rock guitarist Keith Scott has been working his way methodically up through the blues' ranks since his parents bought him his first guitar at age 14 and his young ears heard Muddy Waters in 1980. Born in White Plains, N.Y., Scott was first exposed to the music of Jimi Hendrix, Led Zeppelin and Grand Funk Railroad. With this sonic baptism, a mind-set and foundation were established for him to explore the realm of blues inhabited by the creme de la creme of Chicago musicians such as Waters, Howlin' Wolf, Jimmy Reed and others in that pantheon. Little did Scott know, however, that he would go on in just a few years to actually play with many of the greats of post-war Chicago blues.


8/27 - Mercedes Nicole
“Talent aplenty, Ms. Nicole’s voice and delivery strike your memory in familiar ways. Comparison to world-famous blues and jazz females are tempting, perhaps justified. Nonetheless, Ms. Nicole is never derivative but rather refreshingly comfortable in an all-new manner. Mercedes Nicole is also smart enough to work superb material. On her CD “People Are Talking”, she easily interprets standards by such great tunesmiths as Van Morrison, Vernon Duke, Antônio Carlos Jobim, and George Gershwin into her own repertoire. The first time you hear Ms. Nicole you make the assumption: this is some legendary great from the past in some glorious newly re-mastered recording you have never heard before. You’re a little surprised when you’re wrong and more than a little intrigued – this is Mercedes Nicole, who in her own quiet, unassuming way is as much bigger than life as any of her peers.

Please tune in every Thursday, July 9, 2020 – August 27, 2020 7pm – 9pm via Youtube at downtownissaquah.com/youtube or on our Facebook page at facebook.com/downtownissaquah.