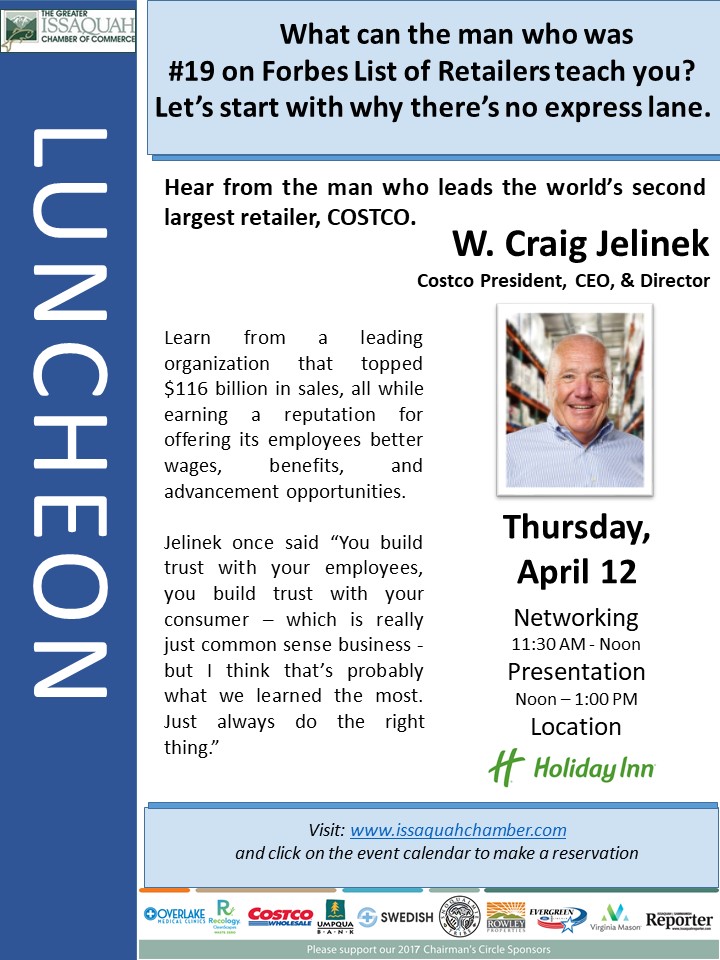 Join us at our next luncheon with guest speaker W. Craig Jelinek, Costco President, CEO, and Director.

About Mr. Jelinek:
Craig hails from the high desert town of Lancaster, California, 60 miles north of Los Angeles. It was here that he grew up and attended high school and junior college, and it was here that he got his first job as a part-time food stocker with Fed-Mart’s Lancaster franchise. He worked for Fed-Mart through college and graduated with an Associate’s degree in Business Administration in 1975.

Craig held various management positions with Fed-Mart, eventually becoming operations manager for its Los Angeles division until its closure in 1982. He spent the next two years with a department store chain called Gemco. In 1984 he joined Costco, opening the company’s sixth location in Tukwila, Washington. He played a key role in Costco’s expansion into Nevada and California. As Assistant Vice President, Regional Manager of what was then called the Southwest Region, Craig was responsible for the opening of the Reno and Las Vegas warehouses in Nevada, as well as openings in Fresno, Bakersfield, Stockton, and numerous other locations in both Northern and Southern California.

“The mid-80s were probably the most challenging years of my career,” says Craig. “We were expanding rapidly, but didn’t yet have many central support departments, so I had to wear a lot of hats.” From running operations and working with warehouse managers, to attending city council meetings and meeting with architects, he was involved in just about everything.

Craig returned to the Puget Sound region in 1992, assuming the title of Senior Vice President, Operations, for the West Coast. The Price Club merger in October 1993 brought new changes, and he took over the Northwest Region. In 2004 Craig was promoted to Executive Vice President and COO of Merchandising overseeing E-commerce, Fresh Foods, Meat, Bakery, Deli, Produce, Foods, Non-Foods, Pharmacy, Home/Business Centers and Purchasing. In 2010, Craig was named President and COO, and he joined Costco’s Board of Directors. In January 2012, Jim Sinegal retired, and Craig took over as CEO.

We strongly encourage reservations. Refunds are only available for cancelations received before Friday, April 6th at 10 AM. To make a reservation after online registration has closed please call the Chamber office at: 426-392-7024 and we will do our best to accommodate you.  If the event is not sold out, price at the door is $10 more than pre-registration price. Meal service may be limited.