Pianos in the Park 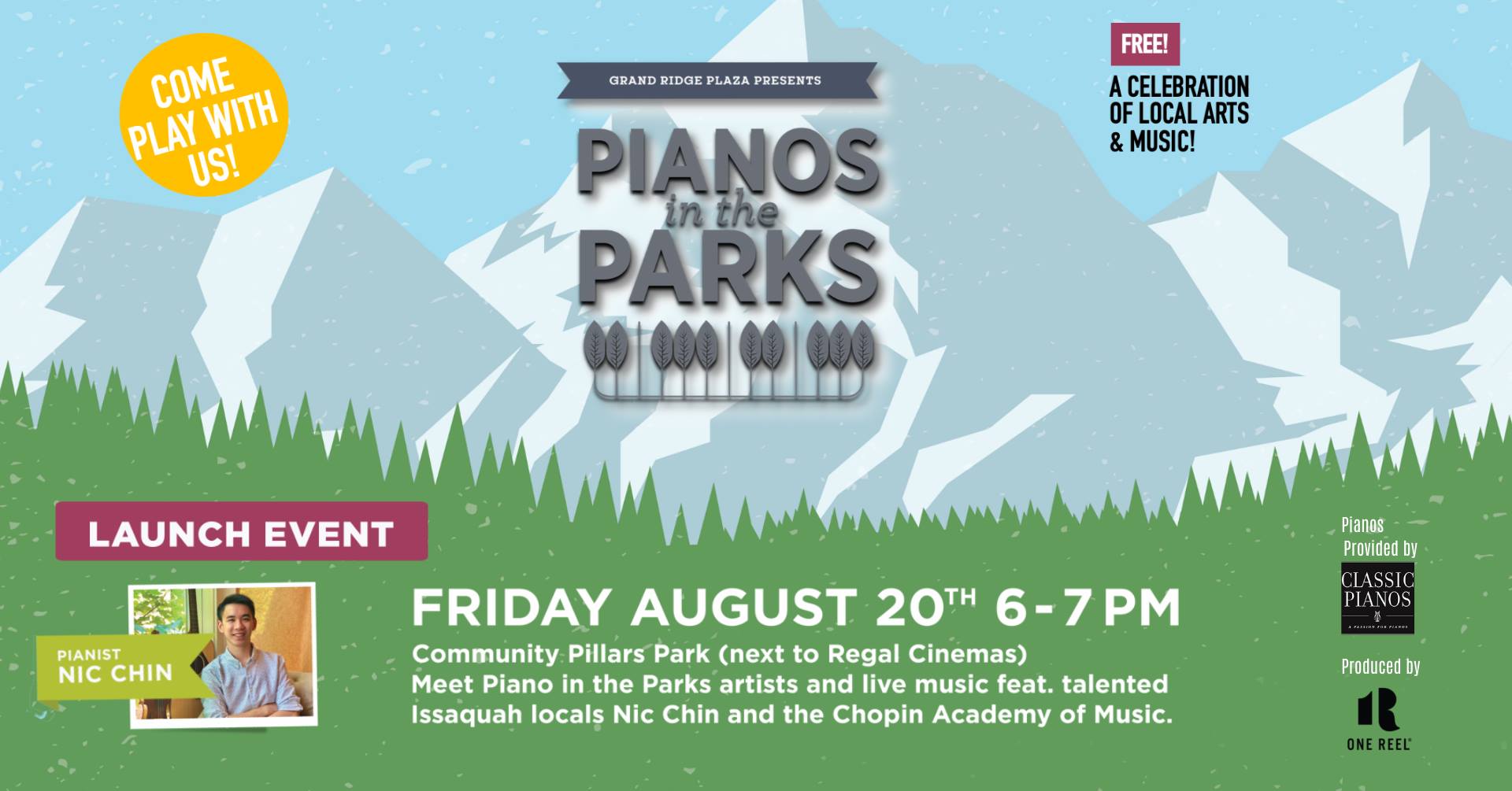 Grand Ridge Plaza invites you to join us for a free celebration of music and art in the Issaquah Highlands to kick off a Pianos In The Parks special event!
On August 20th, we will unveil two pianos at Grand Ridge Plaza that have been beautifully transformed by local artists Soo Hong and Priyanka Parmanand. Following the reception, each of the pianos will be made available daily to the public and we encourage piano players to share their talents with the Issaquah Highlands community through August 31st.
This special event will kick things off starting at 6 PM and will include musical performances by Nicholas Chin and a selection of musicians from the Chopin Music Academy. PLUS a meet & greet with the artists, a complimentary photo booth, cool giveaways and a special limited edition t-shirt designed by local artists Sarah Wu and Annie Pradhan will be available to the first 200 visitors!
The event is FREE to attend, but we will share opportunities to donate to our charity of choice, UW Medicine’s Cancer Research department, via a campaign set up by Nicholas and Angelina Chin, in honor of their father, Sam Chin. Their goal is to raise money that will lead to breakthroughs that might one day spare other families from the devastation and pain that follows the loss of a beloved husband and father.
To support this effort, we will announce the opening of an online auction to allow the public to bid on the two amazing pianos transformed by Soo Hong and Priyanka Parmanand that are featured at Grand Ridge Plaza during Pianos In The Parks. The auction kicks off on August 20th and runs through August 27. 100% of the money raised from the auction will be donated to UW Medicine’s Cancer Research department, via the Chin Family’s campaign. The cost of moving the pianos (up to 15 miles) from Grand Ridge Plaza to a destination chosen by each of the auction winners will be paid for by Grand Ridge Plaza.
Both of the featured pianos were generously donated by Classic Pianos (Bellevue). Classic Pianos has been a trusted and invested partner of Pianos In the Parks since its inception, donating hundreds of pianos in support of the Pianos in the Parks program which, in turn , allows us to bring music and joy to communities through out the Puget Sound.
This very special incarnation of Pianos in the Parks is made possible through the generosity of presenter, Grand Ridge Plaza, and is produced by One Reel.
We hope you will join us at Grand Ridge Plaza for the presentation! The event presents a perfect opportunity for folks to enjoy gather alongside neighbors and friends for an evening of music and art.

Following the Launch Event on August 20th, the Pianos in the Parks of Grand Ridge Plaza are open to the public — daily through August 31.
We encourage musicians to COME PLAY WITH US! Issaquah Highlands is the perfect, tranquil setting to play piano in the great outdoors. Share your talents with the community!
Pianos in the Park